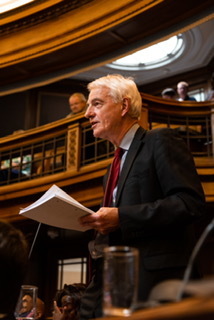 What does "Levelling Up" mean and how successful is it likely to be?

SIGOMA are delighted to present 2 documents on "levelling up".

Writing for SIGOMA, Cllr Graham Chapman has set out a detailed review of current policies and a concrete list of recommendations about what is required to ensure that the "levelling up" policy is a success.

An online version of "The Levelling Up Policy – How Effective is it Likely to Be?" can be found here.

Graham Chapman has a PhD in Regional Development and is former Deputy Chair of the East Midlands Development Agency and former Leader of Nottingham City Council.

Following on from Cllr Chapman's report, SIGOMA have developed a concise submission in advance of the white paper. This sets out the major failings of the government's agenda thus far, and the steps that should be taken.

An online version of the report can be found here.

Cllr Sir Stephen Houghton, chair of SIGOMA, said: “This document is a crucial intervention from towns and cities across the north, midlands and southern coastal areas. A government-wide agenda to bring investment and growth to our regions is long overdue.

However, the government are making a series of key mistakes: lack of focus on the areas that really need “levelling up”, over-reliance on new infrastructure rather than the crucial funding of high-quality public services supporting the most in need and a “Whitehall knows best” philosophy. There are several key steps the government must take immediately to ensure their agenda starts to bring parity between the regions of the country.

Firstly, the strategy needs to acknowledge the importance of everyday public services. New funding pots are dwarfed by historic cuts to council funding since 2010. You can’t “level up” when core services are being cut and local investments curtailed. Secondly, funding needs to be better targeted - the government needs to understand that you can’t level up everywhere. The government should use their own indices of multiple deprivation rather than inventing new opaque formulas. Finally, more decision making should be done at the local level – we need proper devolution where key decisions are taken in town halls rather than in Whitehall”.

If you have any issues downloading either file, please get in touch with us at SigomaEnquiries@barnsley.gov.uk